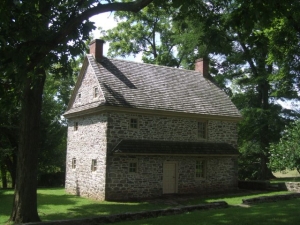 No visit to Chester County would be complete without a visit to Valley Forge National Park. Thousands of rolling acres are preserved as a testimony to young America’s perseverance against the British during the Revolutionary War. It was here in 1777-78 that General George Washington chose Valley Forge as his first winter encampment. The troops were clothed in mere rags. It was their daunting courage, and determination that allowed these men to prevail against the winter fury.

While encamped here, the Continental army became a cohesive, disciplined fighting force and in the spring they left their city of over 2,000 huts and miles of trenches to meet the British as a more formidable opponent.

Spend time enjoying one of Philadelphia’s best settings. The park is free to all. But be aware, there is a more personal cost, a surge in national pride.